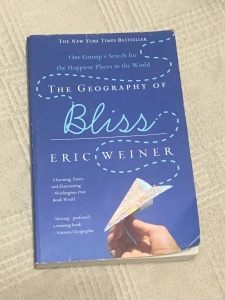 A few years ago, I was in a book club and one of the books we read was The Geography of Bliss by Eric Weiner.  Weiner travels the world to 10 different countries in search of the happiest places in the world. He seeks out a Dutch professor, Ruut Veenhoven, who runs the World Database of Happiness (WDH) in Rotterdam to examine his research. As I was going through the book this evening, I stopped at a few pages I had earmarked. One of these contained the findings that Weiner noted from Rotterdam (with the thoughts I had as I was reading):

One of Wiener’s last comments in the book are “Our happiness is completely and utterly intertwined with other people: family and friends and neighbors and the woman you hardly notice who cleans your office. Happiness is not a noun or a verb. It’s a conjunction. Connective tissue.”  <– sometimes the happiest person I see all day is that lady who takes my office trash!  True Story.

I found this book intriguing yet obvious, funny yet insightful and now I want to travel. 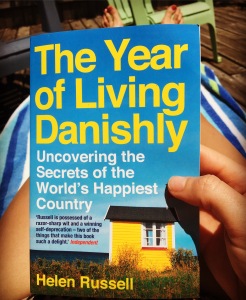 Fast forward to this past weekend and I started a new book called The Year of Living Danishly by Helen Russell. Russell is witty. I found myself laughing even in the intro and I wanted to read more. (Which is something I rarely say!) Russell shares  the journey of moving her life from London to Denmark because her husband (referred to as Lego Man) landed a job with Legoland and she spends one year committed to living a Danishly- I don’t quite know what that means yet, but I’m soon to find out!

So what does The Geography of Bliss and The Year of Living Danishly have in common? I thought you’d never ask! According to the WDH, Denmark is ranked #1 among 155 nations as having the highest level of “inequality adjusted happiest” which “is measured as a linear combination of the mean and the standard deviation of the distribution of happiness in a nation.” Essentially if everyone in the country was completely happy, the country could score 100. Denmark ranks #1. Take away the technical, mathematical calculation, and I’m pretty sure we can summarize it as the Danes are pretty happy.

Russell knew this as well and set out on a journey to uncover why the Danes are so happy and how she might in turn, become happier by living Danishly. What’s their secret and how happy do they consider themselves??

Since I really have enjoy this book so far, and have an interest in Danish living, I’m going to embark on my own journey – to learn why and how Denmark is so happy and see if I can incorporate Danish living in the US.

I’m going to call this The Denmark Challenge. Each month I will read and study a new chapter in this book, learn and adapt. The book is broken into 12 chapters, one for each month of the year. I’ll share what I’ve learned and how I’m “living Danishly in America” My hope is that I leave this challenge with much more knowledge of Denmark (not going to lie- I wasn’t even exactly sure where it was on the map) and a full embrace of happiness, which might be the Danish way of happiness, but only time will tell.

I’ll leave each post with a few Facts About Denmark and Living Danishly that I’ve gathered so far in the book and other research. I hope you take this journey with me to “Living Danishly.”

PS – After writing this, I now have Bob Marley’s “Everything’s gonna be alright” in my head… okay – not sure what Denmark and Bob Marley have in common but these are nice tunes to jam to as I’m getting ready for bed.

Hi! I'm Cassie! I'm a food & wine enthusiast with a passion for experimenting with new recipes. I love running and biking, traveling, my family and my rescue dog, Emmie, and goldendoodle, Oliver. I'm a CPA so naturally, I find number crunching fun. Live adventurously, love passionately and never stop laughing.